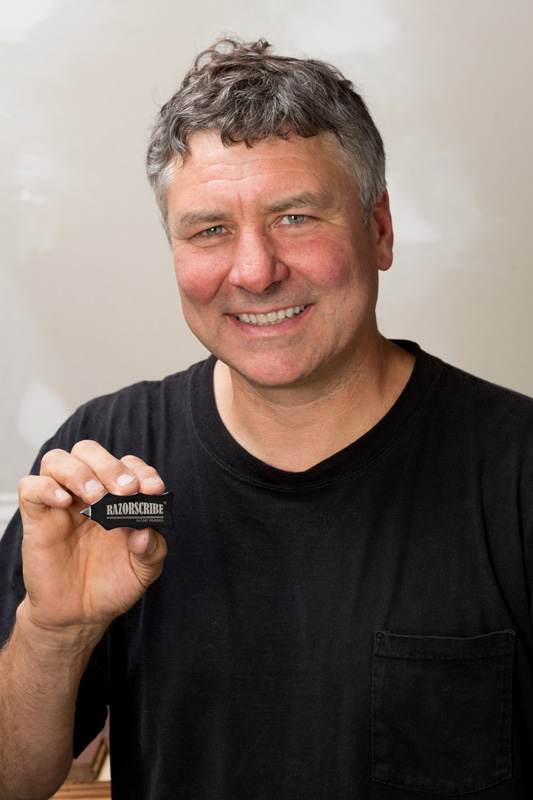 Dave Brallier is a native Californian and licensed general contractor with 20 years experience working as a finish carpenter in high-end homes.

While attending Chico State in the mid 1980’s, he was a competitive springboard diver, finishing 3rd and 5th at Division II Nationals. While at Chico, he was recruited by a Hong Kong-based entertainment company and travelled throughout Europe, Japan and South Africa setting up for and performing in high dive shows, which included a fire dive and a perilous 80 ft high dive.

Once his diving days were over, Dave settled in the San Francisco Bay Area and began working with a college friend who ran a finish carpentry business. Eventually, Dave founded his own company where he and his crew do finish work on high-end custom homes.

The first prototype of the RazorScribe® was born out of sheer necessity. While installing a bank of custom curly maple panelling onto light-colored limestone, Dave realized even the smallest gap would be painfully obvious. An inaccurate pencil scribe line just wouldn’t do. His epiphany was to epoxy a razorblade to a block of wood, allowing him to cut through the veneer, leaving a clear, precise scribe mark.

The tool proved incredibly accurate and allowed for quick and easy removal of excess material. But, the device itself was not adjustable so for each new project, Dave would construct a new scribe, trying different materials, blades and adhesions with the goal of making it safer and more adaptable.

Seven years and countless innovative renditions later, Dave arrived at the current, perfected version of RazorScribe®. Although having invented many other things, RazorScribe® is the first creation Dave has brought to market. It is a must-have for professional finish carpenters and cabinet installers.

“This is the best scribing tool I have ever used.”

“I love it when a tool does exactly what it’s supposed to do and makes my work look so good.”

“I wish I would have invented it!”

“I can’t get over how easy it is to remove the material.”